Demodecosis is a common skin disease that has been described in the literature as far back as the Middle Ages. It affects both young and adult dogs, and can present in both a localised and a generalised form. Whereas the prognosis for complete resolution used to be guarded for some cases, recent advances in treatment have resulted in a much more favourable prognosis. Here, we follow Boon Long's story as she is treated by one of our Thai ITC vets.

A female, stray dog, 4 months old, was reported to the WVS Thailand Rescue and Rehabilitation Clinic for a skin condition. 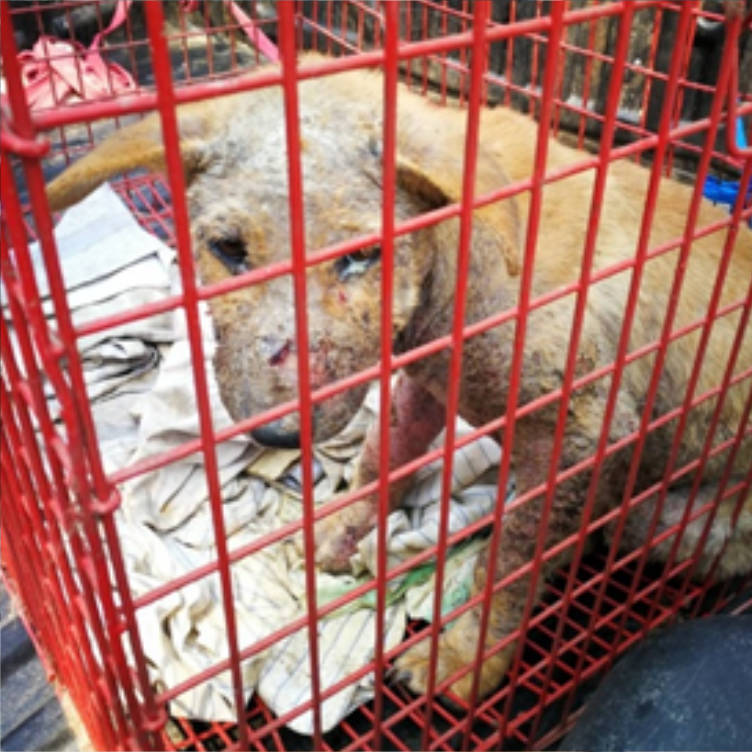 Deep skin scrapes were taken at 2-3 locations (to ensure that the skin scrape is deep enough, continue until you observe blood). The result showed numerous Demodex spp. (varying stages) (Figure 1). 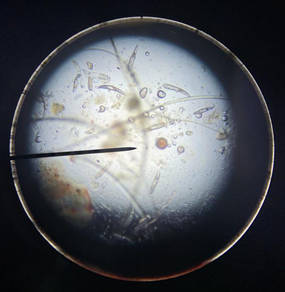 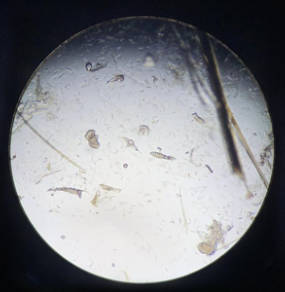 A tentative diagnosis was generalised demodicosis with secondary pyoderma was made.

The treatment plan started with the administration of Afoxolaner (Nexguard ®) orally every 4 weeks, alongside medicated baths with the antifungal and antibacterial Malaseb® shampoo every 3 days to treat the Demodex mites (Figure 2). 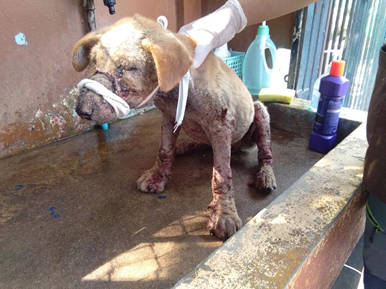 In addition, Cephalexin 150mg PO (by mouth), BID (twice a day), was given for 21 days for the suspected pyoderma with leukocytosis. The follow up plan was to recheck the skin condition through repeated skin scraping every 4 weeks. A deworming protocol was also started on this day.

After treatment for 4 weeks, the skin condition had improved with absence of pyoderma and hair regrowth was at 30% of its normal density. The deep skin scraping was negative from Demodex spp. The Cephalexin antibiotic treatment for pyoderma was stopped. The second Afoxolaner treatment was administered and the medicated bath was continued every 3 days for 4 weeks. Also, one capsule of fish oil PO SID (once a day) for 14 days, with a plan to recheck in 14 days.

On the second follow up (Day 43), Demodex spp was found on the skin scraping slide (Figure 2B). As a result, the medicated bath was continued. The third follow up (Day 57) Demodex spp. were still present on the skin scraping slide, Boon Long’s skin condition showed only mild generalised alopecia (hair regrowth for 60% of normal density); scaling and erythema were absent. The medicated bath was continued and the third Afoxolaner was given. The fourth follow up will be on Day 85 and the treatment will continue until two consecutive negative skin scrapings are obtained.

Canine demodicosis is a common cutaneous disease caused by two species of mite – Demodex canis and Demodex injai, with the former being more common in causing disease. D.canis is an ectoparasite and a normal inhabitant of canine hair follicles and sebaceous glands of the skin. The mites are transmitted by direct contact between the dam and puppies shortly after birth. Canine demodicosis occurs when an altered immune response allows over-proliferation of mites, leading to the development of clinical signs. The clinical signs include patchy to diffuse alopecia, erythematous, papules, pustules, comedones and scales. Pruritus is usually absent unless a concurrent allergy or secondary skin infection develops. If untreated, these patients may also develop hyperpigmentation and lichenification along with increased body odour due to excess sebum production from sebaceous glands associated with hair follicles.

Demodicosis can be classified into two forms: localised demodicosis and generalised, with either juvenile or adult onset. These classifications are important to define since the treatment protocol and prognosis can differ. Adult onset demodicosis always has underlying cause that alters the patient’s immune system. Localised demodicosis typically is limited to less than 4 patchy alopecic regions with diameter less than 2.5 cm, whilst the generalised form has five to six patches, or one area of the body widely affected, and/or more than two paws. Lesions of the skin of the feet (demodectic pododermatitis) are invariably features of generalised demodicosis, but some cases present with foot lesions alone.

Dogs may be affected at any age. Juvenile onset demodicosis typically presents in patients younger than 1 year of age, and presentation is usually localised. It is suspected that some cases are due to a defect in the immune system that may be genetically linked, as evidenced by certain breed predispositions. However, immunosuppression caused by internal parasites or malnutrition may also predispose younger patients to a proliferation of Demodex spp. mites.  Patients that show clinical signs of adult onset demodicosis are often older than 4 years of age. Fifty percent of these patients have an underlying condition—typically a disease that suppresses the immune system and predisposes them to demodicosis. It is thought that the juvenile onset generalised form develops as a result of an inherited immune dysfunction; therefore, owners of patients with this form of disease should be advised that their dogs should not be bred.

Boon Long was 4 months old on the day she was admitted, and she showed generalised alopecia, pustules, pyodermas, with lichenification and deep skin scraping found numerous Demodex spp. In this case, we can classified her condition as juvenile-onset, chronic, generalised, demodicosis, with secondary bacterial infection. As she was a stray dog, it is possible that she had poor immunity due to malnutrition caused by factors such as intestinal parasites and a poor-quality diet.

Demodicosis is diagnosed by performing skin scrapings. To find mites, it is necessary to obtain multiple, deep skin scrapings from affected areas. Proper sampling techniques are essential when scraping Demodex mites. Scraping should be deep enough to produce capillary bleeding while squeezing the area being scraped to encourage the mites from the hair follicles. Ideally, for each scraping site, the number of mites (or at least an estimated percentage, including dead and living mites) in each life stage should be recorded in the patient’s medical record. These results can be used to monitor the response to treatment at future rechecks. In our case, the diagnostic technique could perform correctly but, in the future, we should include mite count for monitoring the treatment progression. Other sampling techniques such as hair plucks, adhesive tape preparations and impression smears, may also be diagnostic.

Treatment of generalised demodicosis may be lengthy and costly and it is a very challenging disease to treat effectively. One of the most common reasons for treatment failure is ending therapy too soon. Clinical resolution usually occurs 0.5 to 6 months sooner than parasitological cure (absence of mites on skin samples). Therefore, it is important to rely on length of therapy, rather than clinical appearance, to finalise treatment since clinically improved dogs may still harbour mites.

In some countries, Amitraz dip is the only product licensed to treat demodicosis. Many treatment protocols in the field include off label use of macrocyclic lactone, providing variable efficacy with potential for toxicity, especially in dogs carrying MDR-1 gene mutations. Recently, a new class of insecticides/acaricides, the isoxazolines, demonstrated very good efficacy against many ectoparasites of dogs and cats: fleas and ticks, but also mites including Otodectes cynotis, Sarcoptes scabiei, Lynxacarus radovskyi and Demodex canis.

After treatment begins, patients should be checked every 4 to 6 weeks until two consecutive negative skin scraping results are obtained. Treatment should continue for 4 weeks after the second negative skin scraping result. Once treatment is stopped, the patient is considered to be in remission. Recheck and skin scrapings should be performed every 3 to 4 months for the next year. It should be noted that relapses can occur. According to some authors, dogs should not be considered cured unless there are no relapses in the year following the end of the specific treatment. A minimum of 4 to 6 skin scraping sites should repeat after stopping treatment 3-4 months later to detect a relapse.

If the patient has secondary pyoderma, oral antibiotics may be needed until complete resolution of lesions, which is assessed at the first 4 week recheck. Antibacterial shampoos such as benzoyl peroxide and chlorhexidine can be beneficial for treating patients with secondary pyoderma. Reducing stress and providing adequate nutrition can also improve success in managing demodicosis. Feeding the dog, a complete and balanced diet is important. Fatty acid supplementation may also have a benefit. Underlying conditions such as endoparasite infections and concurrent diseases should be treated.

The omega-3 EFAs are α-linolenic acid, eicosapentanoic acid (EPA), and docosahexaenoic acid (DHA). Linoleic acid is known to be a dietary requirement for adult dogs. DHA is required for growing puppies and there is growing consensus that it, along with EPA, should be considered an essential nutrient for all life stages of dogs and cats. While animal fats used in pet diets are high in omega-6 fatty acids, fish oils, dried algae, marine microalgae, fish meals, or whole fish are used specifically as sources of omega-3 fatty acids. Fish oil supplements with concentrated amounts of EPA and DHA should therefore be considered as providing a “therapeutic or even pharmacological effect”, rather than simply supplying an essential nutrient in pet foods. Pet supplements for joint, skin, and gastrointestinal problems are increasingly popular, and supplements containing EPA and DHA are common. In dogs, recommended total doses of EPA and DHA supplements for therapeutic purposes range from 50 to 220 mg/kg body weight. The highest dose is recommended for osteoarthritis. These therapeutic doses are based on adding the milligrams of EPA and DHA per supplement capsule or millilitres of liquid, which is meant to be the “active ingredient” in many common pet fish oil supplements.

For Boon Long’s case, the isoxazolines group; afoxolaner (NexGard®) was chosen which is off label treatment. The treatment protocol was treating with NexGard® PO every 4 weeks (which related to one study) combined with medicated bath; using miconazole and chlorhexidine solution (Malaseb®) and monitoring skin scrapings every 4 weeks as well. Due to her chronic demodicosis leading to bacterial infection caused by secondary pyoderma included moderate leukocytosis with mild left shift from the blood result, the adjunctive treatment; Cephalexin 150mg PO BID for 21 days was described. A bacterial culture was not performed but this was decided because Boon Long is stray dog with no prior clinical history. While Boon Long is staying with the WVS Rescue and Rehabilitation Clinic, her diet is commercial food plus extra boiled chicken given at 8 am and 3 pm. But due to her BCS and abnormal blood results, additional nutritional supplement was added to her diet. Boon Long still requires a couple of months to fully treat her generalised demodicosis, so we still have time to dispense more fish oil and meet her nutritional requirements while she is staying with us. 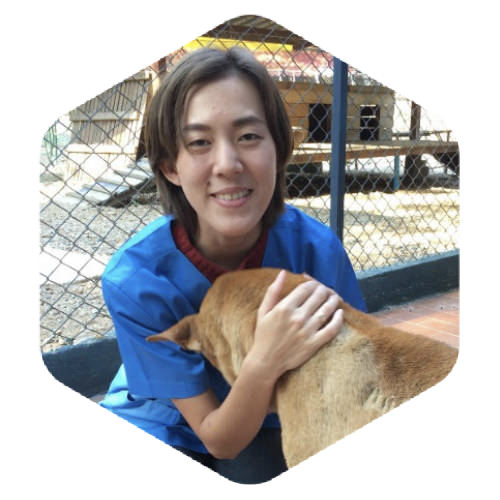 Dr Malisa Santavakul (aka “Lukpla”) has been working with WVS Thailand since April 2019, after graduating from Kasetsart University in Bangkok and working in the Raptor Centre.

She regularly mentors students (Thai and International) and she looks after Rescue Cases, both surgically and medically.