Chao Kuay was a mixed-breed, male, entire, community dog that had a chronic, non-healing wound on his nose for approximately 2 - 3 months. He was sometimes observed sneezing and with blood dripping from his nose (epistaxis). 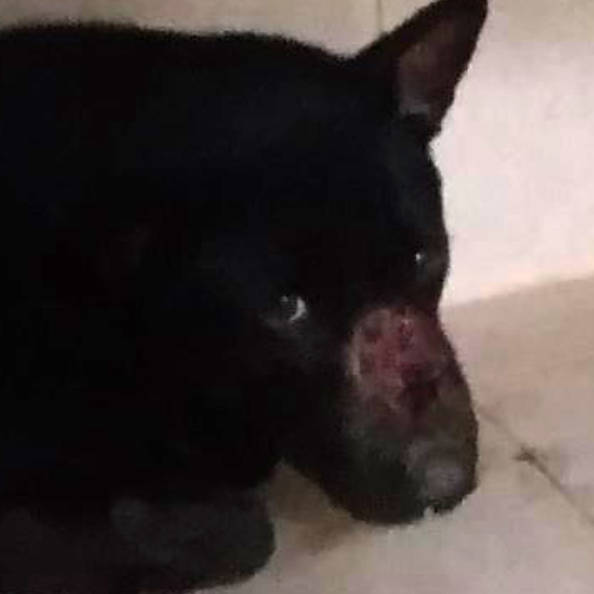 Visual inspection revealed a purulent, erosive, haemorrhagic wound on the dorsal aspect of the nasal planum with exposed nasal turbinates, septum and hard palate visible. The dog appeared quiet, alert and responsive. Mild dyspnoea was present when he was lying in sternal recumbency. Fear aggression behaviour was observed when he was approached; therefore sedation was given prior to performing a physical examination.

A large, protruding and erosive, reddened, cauliflower-like mass was noted associated with a purulent discharge. The mass had not only erupted through the nasal bone of the skull but also partially destroyed basic structures within the nasal cavity (turbinates and conchae). 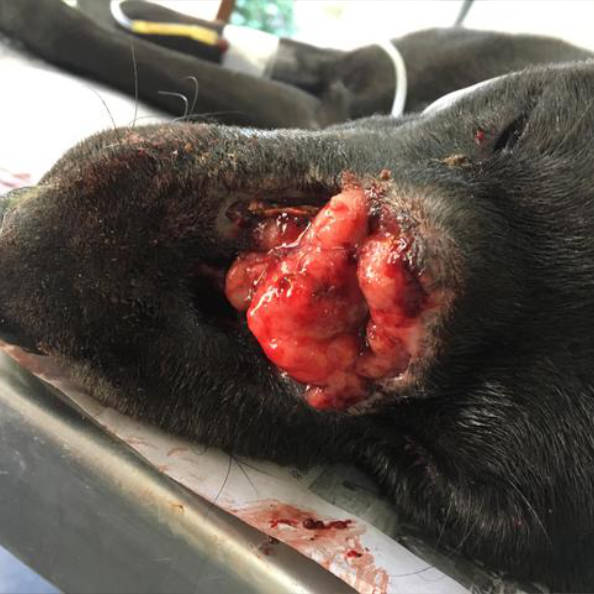 Both premolar teeth in the maxilla were missing, with associated oronasal fistula with parts of the mass also visible from the oral cavity. However, the hard palate was largely still intact and the dog was able to eat normally. A full physical examination was performed and no other abnormalities were detected. A tissue biopsy of the mass was taken and placed in 10% neutral-buffered formalin for histopathological analysis. 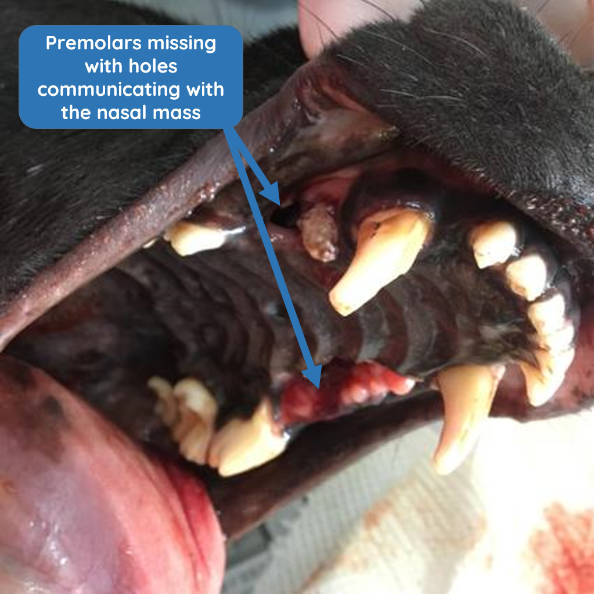 Figure 3 - Oral cavity. Both premolars absent, and associated oronasal fistula as a consequence of the nasal mass.

This revealed facial bone lysis at nasal plate and maxilla, lysis of the nasal and paranasal sinuses, dental dislocation with increase in the soft tissue density which showing presence of the tumorous lesions. 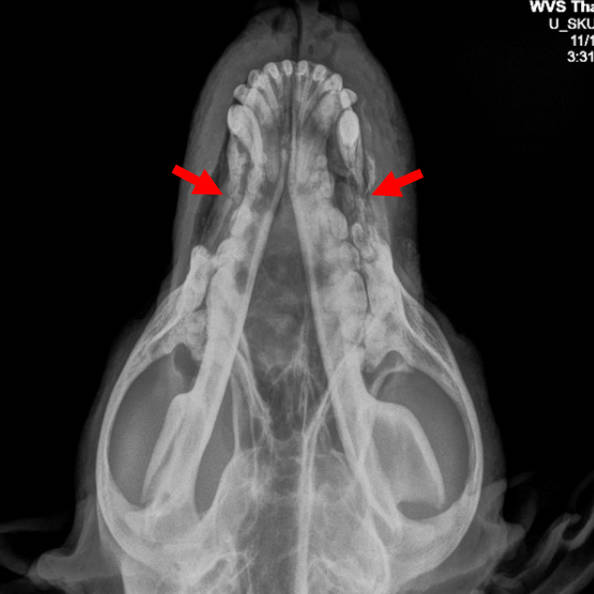 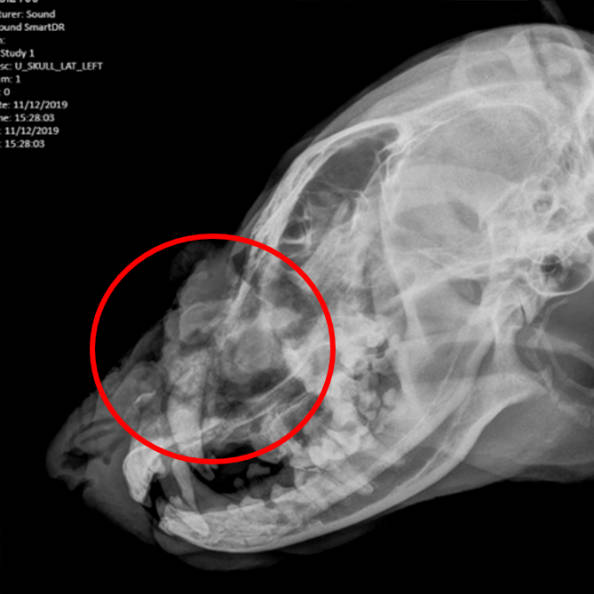 Figure 4 - Radiographs of the head. Left, D-V (left) and lateral (right) images showing bilateral lysis of the bone of the hard palate and sinuses (arrows, circle).

All parameters were within normal limits.

A FNA was taken and examined. Due to the high number of erythrocytes contaminating the sample, TVT was suspected but not diagnosed; a sample of tumour was therefore submitted for histopathological examination.

Below shows the typical cytological appearance of TVT: 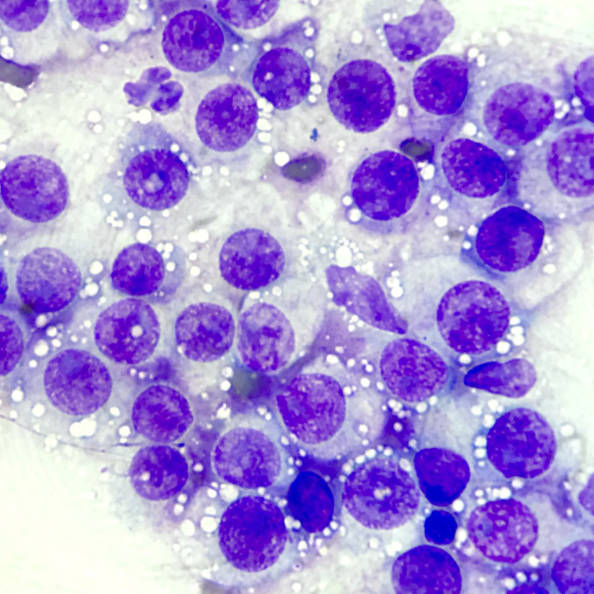 Figure 5 - Cytology of TVT. (this is for illustration only and does not show the original sample from this case).

The typical cell features are as follows:

Cell number. As with other neoplastic conditions, there is a predominance of a single cell type. In this case, they feature numerous discrete round cells, with occasional scattered neutrophils.

Cell shape and size. The round cells are discrete (distinct cell borders).

Cellular features. They have abundant, pale blue cytoplasmic containing prominent, cytoplasmic 'punctate' vacuoles. Nuclei are round with coarse chromatic and often a large, single nucleolus. Anisocytosis (variation in cell size) and anisokaryosis (variation in nuclear size) are, in general, mild to moderate, and mitotic figures are often common.

Histopathology confirmed the suspicion of TVT.

Chemotherapy is considered the treatment of choice for TVTs. As the haematology/clinical chemistry results were within normal parameters, chemotherapy could commence.

Chemotherapy treatment (Vincristine) Vincristine is a drug of choice of TVT, at the dose of 0.025mg/kg, IV only, once a week for 3 - 5 weeks (the duration of treatment depends on size and responsive of the tumour). Cytology is used to monitor effectiveness of the treatment protocol.

During treatment we had to reassess the treatment plan due to complications that occurred. One week after the first vincristine treatment, the dog developed haematuria and cystitis was diagnosed. NSAIDs and antibiotics were given to control any possible infection and inflammation for one week. The second vincristine dose was postponed until after the cystitis had resolved. Upon recovery, blood and urine parameters and urine were rechecked:

Treatment for Ehrlichiosis infection was started with doxycycline (10mg/kg/SID) for 28 days. Meanwhile, chemotherapy was postponed and the patient monitored frequently.

After 2 weeks of receiving doxycycline treatment, we noticed that Chao Kuay was deteriorating. He sneezed frequently, often with epistaxis and neoplastic tissue being expelled. In addition, he became dyspnoeic, developed facial swelling, had loss of appetite, and weight loss resulting in emaciation.

We decided to sedate and reassess the lesion. Unfortunately, the tumour has spread from the bilateral basal sinus to the frontal sinus region (frontal bone); both canine teeth were mobile and unstable. A new infestation with maggots was found deep inside nasal cavity with purulent discharge and necrotic tissue. From his condition and poor prognosis, we decided to perform euthanasia for the dog's poor welfare and reduced quality of life.

Guarded - At the beginning of the treatment.

Poor to Grave - Complications had affected the treatment plan and compromised condition of the dog due to the concurrent Ehrlichiosis infection, subsequent tumour invasion locally and infection.

Transmissible venereal tumour (TVT) is one of the most common genital tumours of dogs. It is classified as a round cells tumour, along with the mast cell tumour, basal cell carcinomas, lymphomas and histiocytomas.

TVT is infectious, and is usually transmitted during mating. It is located most frequently on the penis and prepuce of males, and in the female vagina and vulva. It may affect the skin by the implantation of tumour cells through licking or direct contact following social behaviour, in sites where there was a cutaneous lesion, including oral and nasal lesions. TVT is more commonly observed in the free-roaming, stray, sexually active dogs, appearing as a cauliflower-like growth tumour. There is no breed or sex predilection.

Diagnosis of TVT is based on the history, clinical signs, cytology and histopathology. It is easily diagnosed by the cytology, but in this case, during sample collection there was a lot of discharge and mucous covered the wound and made it difficult to identify the TVT cells through microscopic examination, hence, a tissue biopsy was submitted for histopathological diagnosis.

In this particular case, the tumour found in the nasal cavity appeared to be primary; there was no evidence of a genital tumour.

Chemotherapy is the choice of treatment for TVT. Which normally, without complications, patients recover within 3-4 treatments or 4-6 weeks, depending on size and response of the tumour.

Although the TVTs that are located in the nasal and paranasal sinuses show more favourable prognosis, as compared to other locations, the prognosis for Chao Kuay was reduced due to the marked local destruction of the nasal cavity, maxilla and facial structure. This is likely due to the delay between onset of the tumour and treatment being started.

Another challenge was Chao Kuay's fear of human contact, which made it difficult to routinely carry out checks and clinical examinations. A compromise had to found between monitoring his treatment and avoiding excessive stress and anxiety due to being handled. This is difficult with many un-owned, free-roaming dogs. As he was unowned and not used to close human contact, it is likely that sustained, high stress levels of being in a hospital environment contributed to the cystitis.

Ultimately, with the establishment and invasion of the tumour, alongside the complications during treatment, with resultant reduction in welfare and quality of life, led us to a decision of euthanasia. 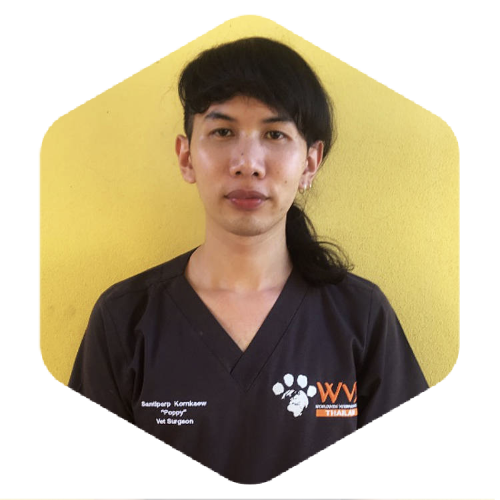 Dr Santiparp Kornakaew (aka Poppy) is the Senior Thai Vet at WVS Thailand; has been working with WVS since 2015, has attended dozens of Rescue Cases and has mentored over 200 students, Thai and International, as part of our Training Programme.