Here we describe the management of a hepatoid gland tumour by vets at the WVS International Training Centre in Thailand.

Ocean presented to the centre with a large mass in her perianal area.

Ocean was an 8 year old, neutered, female Thai-mix breed community dog living in Chiang Mai. She presented to the clinic with a mass in her perianal area which had been growing for an unspecified amount of time. No further history was known. 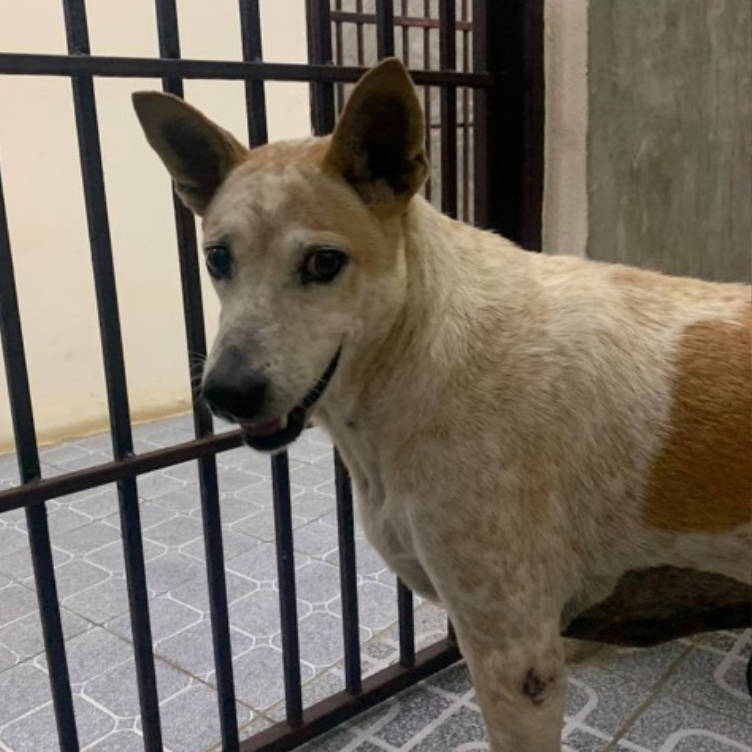 A physical examination revealed that she was in good, general condition. A large, pedunculated, perianal mass was identified originating from the right perianal area, and with dimensions of 5 cm x 5 cm diameter. The mass was firm, irregular, non-invasive, and non-ulcerative. Peripheral lymph node palpation revealed both popliteal and inguinal lymph node enlargement. There were no other remarkable clinical signs. 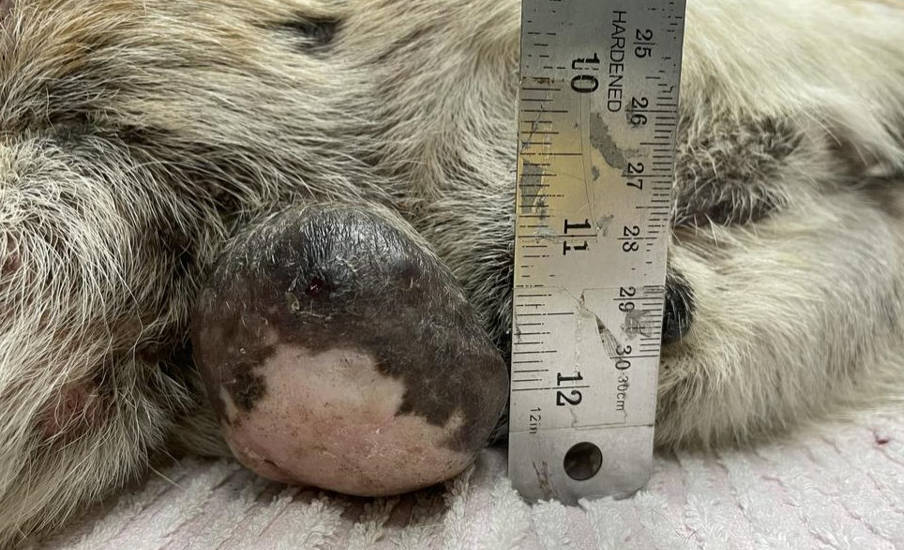 Figure 2 - Ocean's perianal mass at the time of presentation. 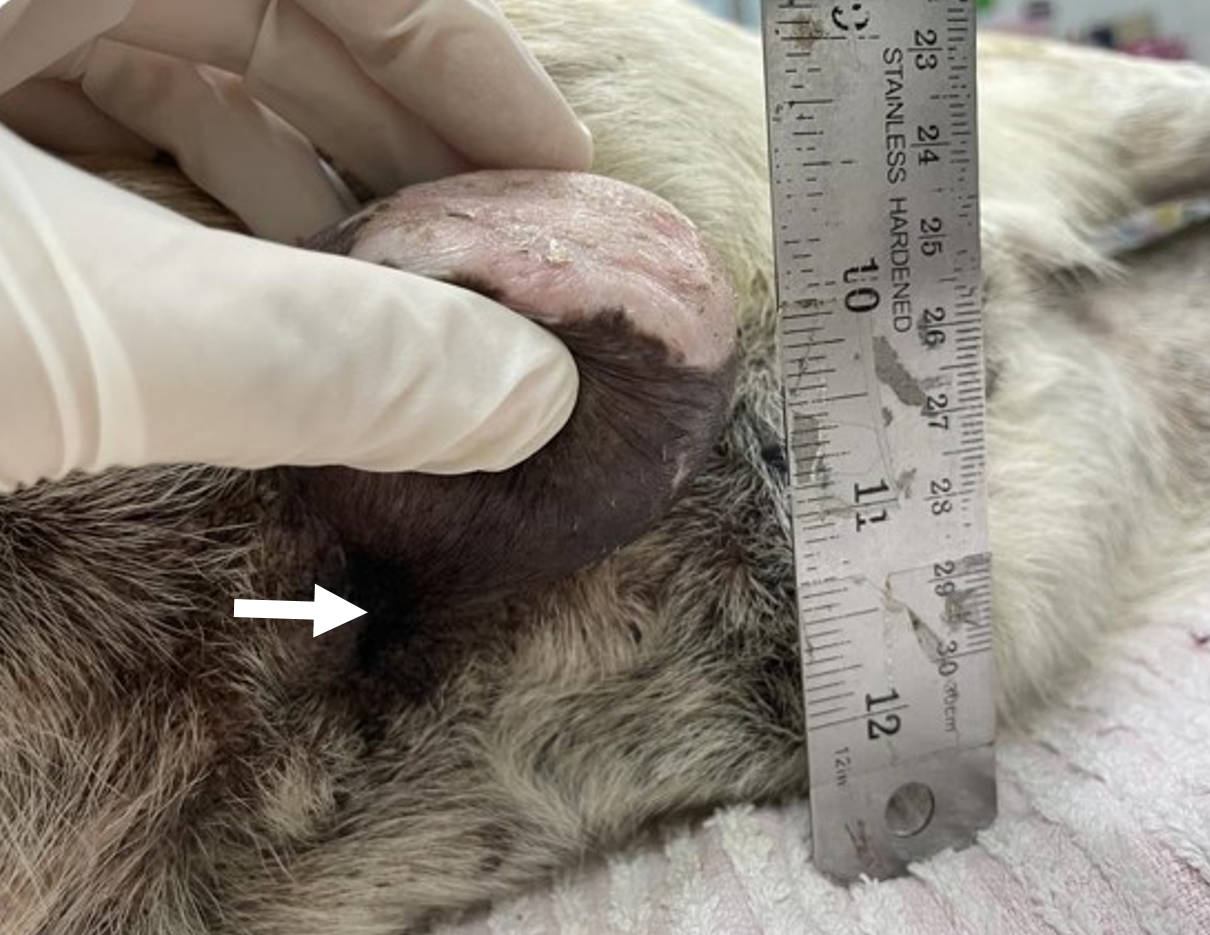 Figure 3 - Ocean's perianal mass prior to surgery. Note the small stalk like attachment to the underlying skin layer (arrow).

A suspected tumour requires microscopic examination of the tissue, which may involve one or more methods of obtaining a tissue sample for diagnosis. The most common methods include fine needle aspiration (FNA), or a an incisional or excisional biopsy of the tumour (the latter is complete removal).

An FNA from the mass suggested it was a hepatoid gland tumour comprising rafts of epithelial cells, often with a polygonal appearance resembling hepatocytes, with abundant pink cytoplasm and oval nuclei, often with prominent nucleoli. An example of the appearance of a typical hepatoid cell adenoma is shown below (this image is taken from a different case and not Ocean herself). 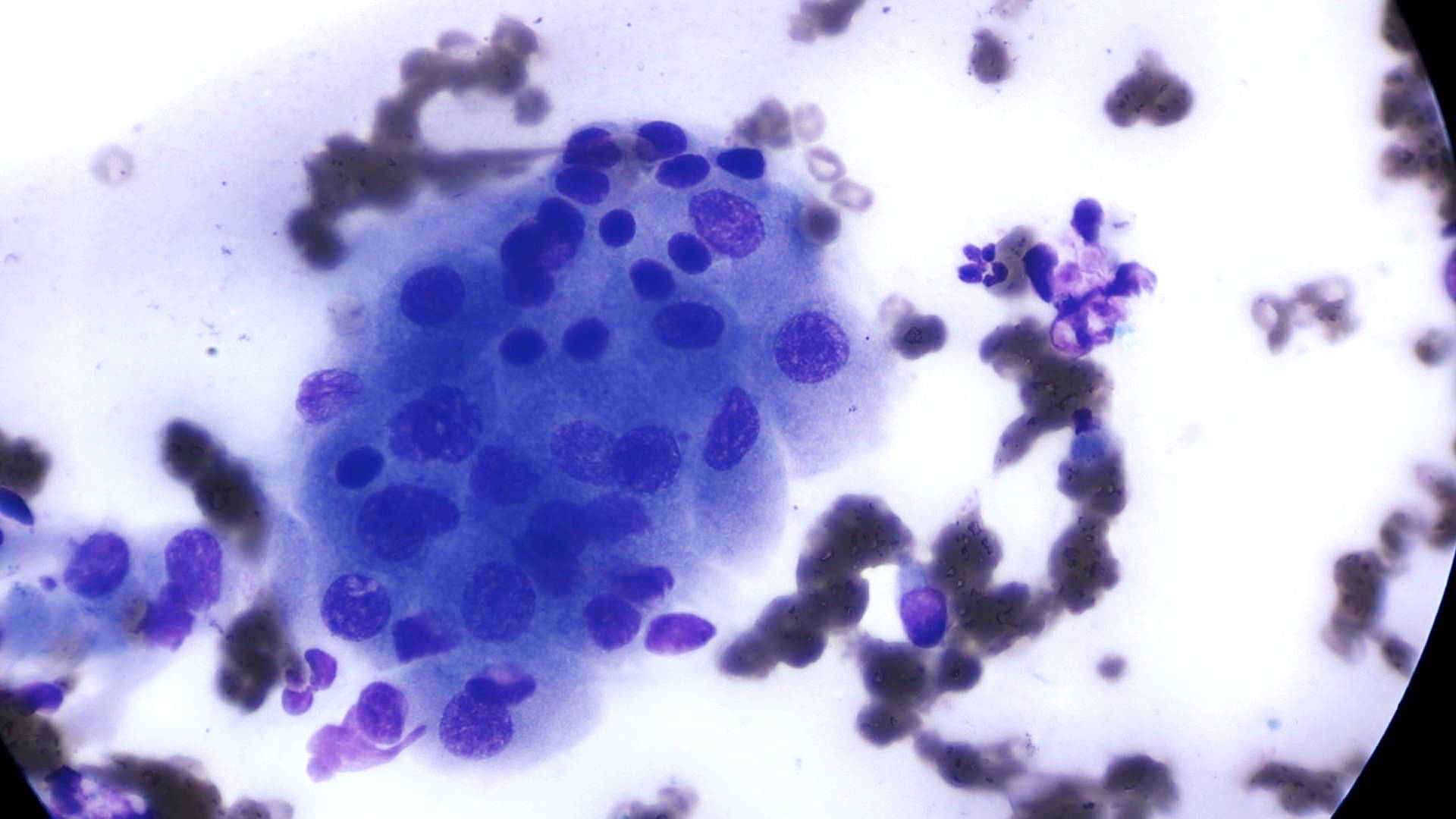 Figure 4 - rafts of epithelial cells with distinct borders; these cells often appear similar to hepatocytes in the liver.

Some of the cells in Ocean's sample were pleomorphic, suggestive of a low-grade adenocarcinoma. It should be remembered, however, that it is difficult to distinguish an adenoma from an adenocarcinoma on cytology alone, and histopathological examination is always recommended, where possible.

Due to the slight concern of the presence of an adenocarcinoma, a thoracic radiograph was taken to investigate presence of lung metastases. Radiographic findings revealed an interstitial lung pattern. 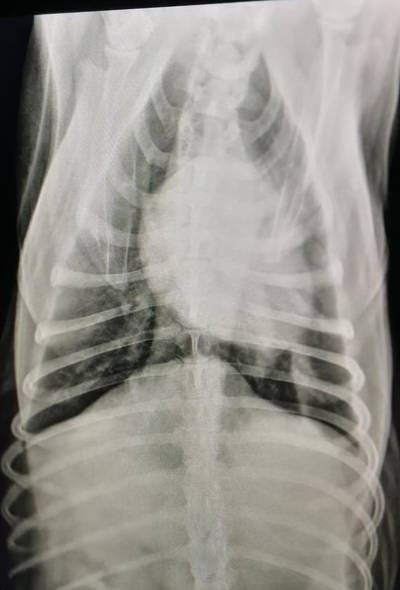 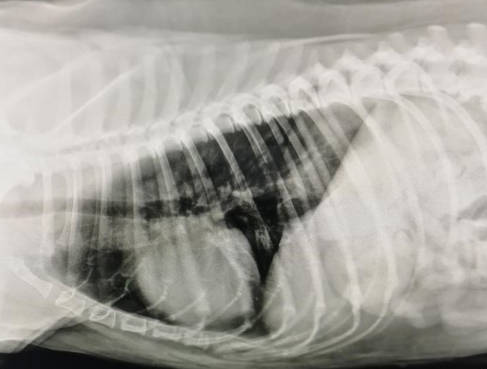 Reminder: what is an interstitial lung pattern?

This pattern can be seen when cells or fluid infiltrate the interstitium of the lung; this appears as a 'ground-glass' or hazy appearance on radiography, which can be diffuse (unstructured) or nodular (structured). In Ocean's case, the pattern was diffuse. Note the reduced detail in the profiles of the blood vessel walls which can help you identify this pattern.

Based on these findings, Ocean was diagnosed with a perianal (hepatoid gland) tumour. Due to the fact that most perianal tumours are benign, and taking into account Ocean's signalment (neutered female), it was strongly suspected that this represented an adenoma. However, the possibility of a low-grade carcinoma couldn't be ruled out without histopathology which wasn't an option in this case.

It was unclear as to whether the interstitial lung pattern was due to small metastases or a respiratory infection, so Ocean was treated for a suspected respiratory infection with doxycycline (10 mg/kg, po, once a day) for 7 days. The thoracic radiograph was then repeated and showed a reduction in interstitial lung pattern, making the cause more likely to reflect a concurrent bacterial lung infection. A repeated complete blood count also showed an improvement, with only a mild thrombocytopaenia. Based on these findings , we decided to proceed with surgical excision of the mass.

The patient was put under general anaesthesia. Firstly, a purse-string suture pattern was placed at the entrance of the anus using a non-absorbable polyamide suture material (Supramid) to prevent contamination of surgical area during the operation.

The mass was removed on the medial side by an incision parallel to the perianal area followed by a curvilinear incision on the lateral aspect of the mass; blunt dissection was used to separate the mass from the underlying tissues.

Due to the close proximity of the surgical wound to the anus, amoxicillin/clavulanate antibiotic tablets were prescribed for 7 days as well as a NSAID (Carprofen) for 5 days after surgery. The wound was assessed frequently to ensure uncomplicated healing. 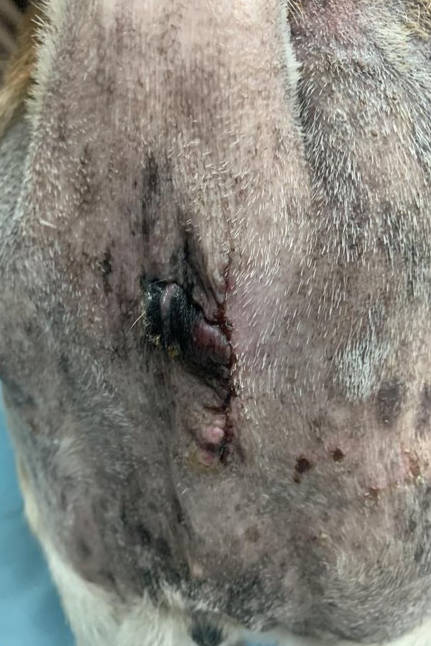 The prognosis for perianal adenomas is excellent with complete excision. It is, however, possible that further tumours may develop in the future from different locations especially if the hormonal influences. For adenocarcinomas, the prognosis is fair to guarded because of the potential for tumour regrowth, tissue invasion, and metastasis. 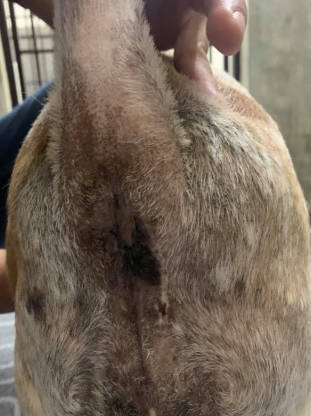 Perianal tumours are common in dogs, with the majority (80-95%) being benign (adenoma). Tumour development is influenced by certain hormones, including testosterone and oestrogen. Tumours are more common in entire male dogs due to the influence of testosterone and are rare in castrated dogs. Conversely, oestrogen inhibits tumour formation, and therefore tumours are more commonly observed in sterilised female dogs. All breeds of dog are affected, but appear more common is specific breeds such as Siberian Huskies, Bulldogs, and Alaskan Malamutes.

Adenomas are slow-growing, well circumscribed and non-invasive tumours that are often removable by surgical excision. When working up a case, it is important to assess degree of invasion and local sublumbar lymph node palpation through a rectal examination. The testes of male dogs should also be examined as concurrent tumours can occur. Adenocarcinomas typically grow rapidly and can become much larger; up to 10 cm in diameter, invading adjacent tissue, and may spread to local lymph nodes and more distant sites such as the lung, although the latter is uncommon. It is more likely that there will be multiple adenocarcinomas than a single lesion because they may also spread to the lymph nodes and underlying tissue, they can compress the rectum causing the dog to have difficulty defecating and constipation.

A biopsy submission for histopathology is the method of choice for definitive diagnosis. In this case, the mass size is smaller than 10 cm, not invading the underlying tissues and the dog wasn’t shown signs of increased drinking and urination, loss of appetite, weight loss, lethargy, weakness, vomiting, difficulty defecation, and constipation. For cases of adenocarcinoma, a wide surgical excision is necessary. In cases where a tumour is inoperable or wide surgical margins are not possible, adjunctive radiation therapy can be considered, if available.

In Ocean's case, her wound remained clean and completely healed and she recovered from her operation without issues. She will be monitored for signs of tumour regrowth or the effects of metastasis. 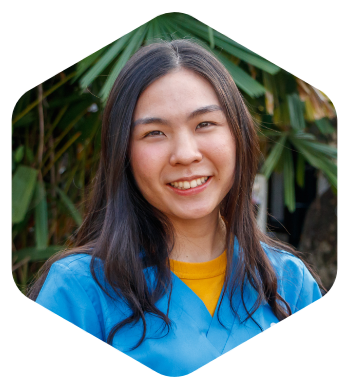 Dr Pavanrut Vikan (AKA Kaotung) started working at WVS Thailand in January 2021, she was one of our Thai Surgical Students and enjoyed her time with us so much, once she graduated she asked for a job.

Dr Kaotung has a keen interest in surgery and has been developing her skills with our team, she is responsible for every day surgical and diagnostic duties in the Jeanne Marchig International Training Centre and Rescue and Rehabilitation Centre.