This case outlines the diagnosis and surgical treatment of a 10 year old cat with a squamous cell carcinoma of the outer structures of both ears (pinna). This condition is most commonly seen in light-haired cats and the tips of the ears are particularly susceptible.

Peach, a female, domestic short hair cat, presented to WVS ITC, Ooty with a persistent growth on the left pinna (ear). The condition had been present for six months, causing pain and discomfort. 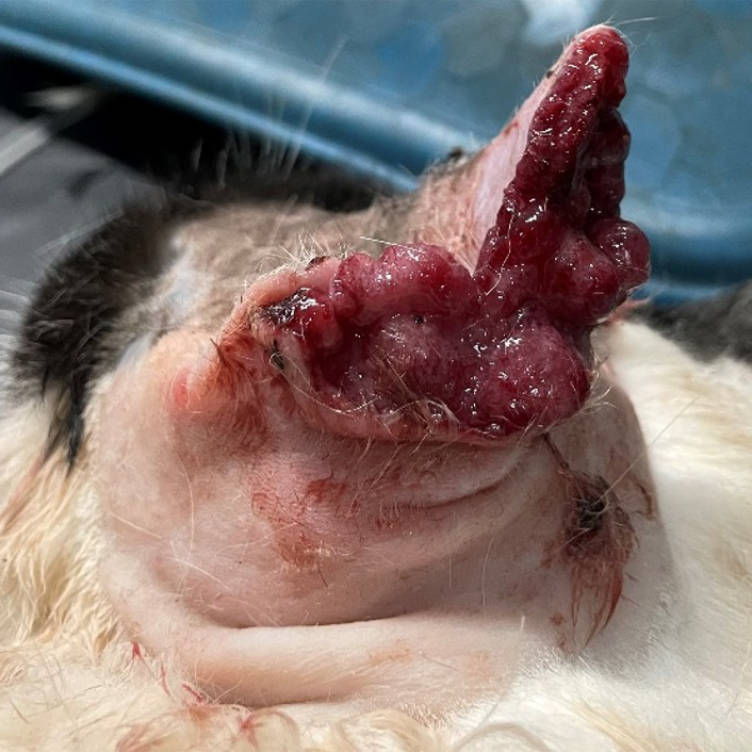 Peach was a 10 year old neutered, domestic short hair cat in good body condition, with no previous medical conditions and no vaccination history.

The lateral aspect of the left pinna was ulcerated, thickened, and erythematous, with a clear exudate covering the surface and signs of self-inflicted trauma of the lesion. The right pinna had a small thickening on the medial aspect which was not ulcerative.

The growth had been present for over six months and was thought to be carcinogenic. The following conditions were in the list of differentials:

If the tumour was malignant then there would be a risk of regional or distant metastasis which occurs via the lymphatic drainage from the aural region, often extending to the parotid and mandibular lymph nodes. SCC has a moderate to low degree of metastasis. Tumours of the external ear can affect the cartilaginous pinna and/or external acoustic meatus (EAM) and the external surface of the tympanic membrane. The covering of the EAM is skin comprising stratified squamous epidermis overlying a dermis that contains hair follicles, sebaceous glands, and specialised apocrine glands called ceruminous glands.

Due to its location and signalment, SCC was considered the most likely cause.

As a part of initial diagnosis, an impression smear was taken. This was made by pressing a clean microscope slide firmly against an area of interest. This can be repeated a few times to gather more cells on the slide. These can be made with any moist or greasy surface. The sample is then fixed and stained using a commercial stain such as 'DiffQuik'. 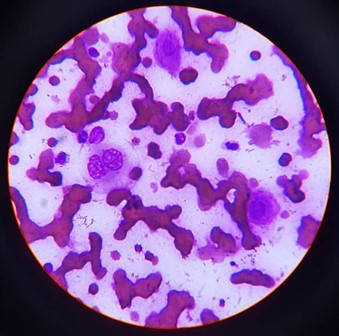 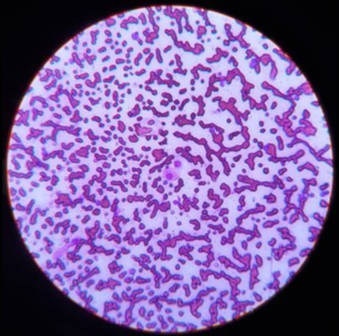 Microscopic examination of the sample taken here revealed a low number of epithelial cells with a degree of cellular atypia, including a binucleate cell. However, infection can result in dysplasia which can be misinterpreted as neoplastic, and so confirmation of the suspected diagnosis of SCC requires histopathology.

An incisional biopsy was taken and sent for histopathological examination. This confirmed the diagnosis of SCC.

These two methods are used to determine prognosis and help guide treatment after a tumour has been found to be malignant. The prognosis is usually inversely proportional to the tumour burden.

Clinical staging: is a measure of how far the cancer has spread through the body, sometimes called the extent of a cancer. The presence of lesions is evaluated in lymph nodes and other organs using invasive and/or non-invasive procedures such as palpation, FNA, biopsy, x-ray, bronchoscopy and endoscopy. For this case the staging was as follows:

Radiographic examination revealed no evidence of metastases to the lung or lymph nodes. A minimum of two views should be used when evaluating for metastases. The lateral view of Peach is shown below: 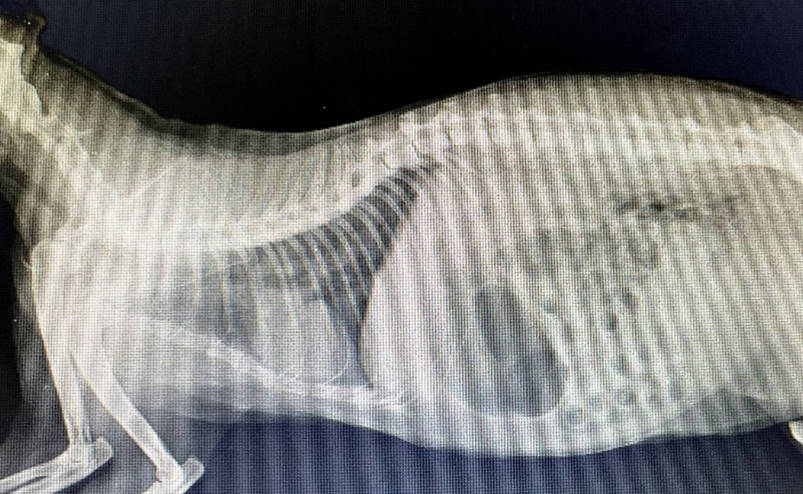 Figure 4 - lateral view of thorax and abdomen did not reveal any abnormal findings.

Grading: this involves the macroscopic and microscopic degree of differentiation of the tumour. The tumour is graded based on parameters in the table below and will be included in the histopathology report:

The tumour in question was graded as moderately differentiated (G2).

Peach was considered to be stable for anaesthesia, the clinicians decided on surgical excision as the primary treatment.

Peach was fasted for twelve hours prior to the surgery. Four to eight hours of fasting is considered ideal as pre-operative care1. The following protocol was used for sedation and induction.

As the right ear was also found to have a small growth, which had the potential to differentiate into a carcinoma, so it was decided that a complete ‘pinnectomy’ of both ears would be performed to reduce the repetitive risk of anaesthesia.

After anaesthetic induction with propofol, the ear pinnae were prepared aseptically for the surgery. 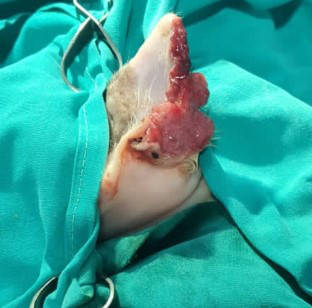 Incisional margins were determined in such a way that the whole mass and the bordering healthy tissue could be removed. This is done as a precautionary measure to avoid leaving any cancerous cells.

A size-22 blade was used to incise the skin on the pre-determined margins on the medial and lateral surfaces of the pinna. The skin was undermined with the help of Metzenbaum scissors to separate the auricular cartilage from the overlying skin. The bleeding was controlled with haemostatic clamps. The cartilage was cut at a deeper level than the skin incision to allow a skin-to-skin closure without excessive tension over the underlying cartilage. 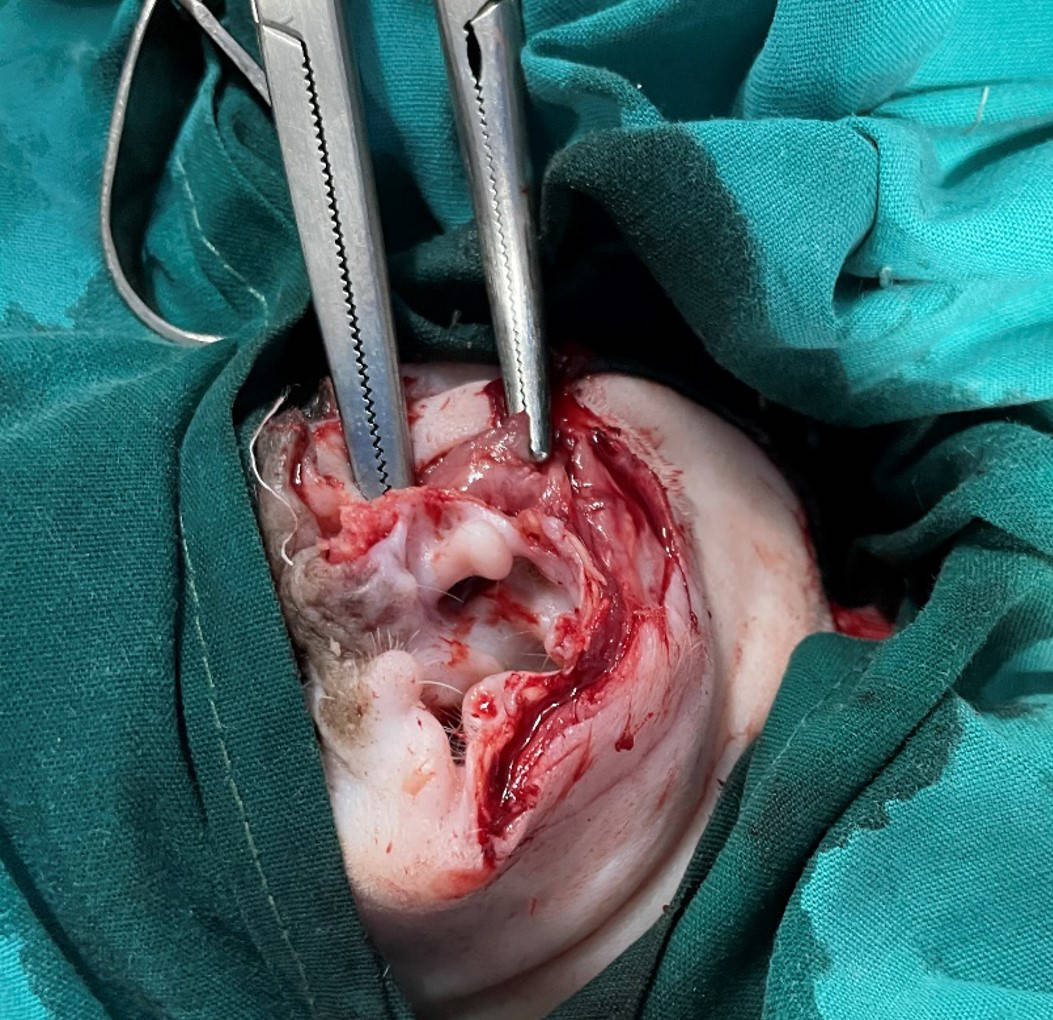 Figure 6 - Removal of the tumour and underlying cartilage.

After removing the pinnal mass, the incision was checked for active bleeding. After making sure that no blood vessels were damaged, the incision was closed by placing cruciate skin sutures with polydioxanone (PDS) size 2.0 suture material. The cartilage was excluded from the sutures by ensuring complete apposition of the skin edges both sides of the surgical wound. The procedure was then repeated for the other ear. 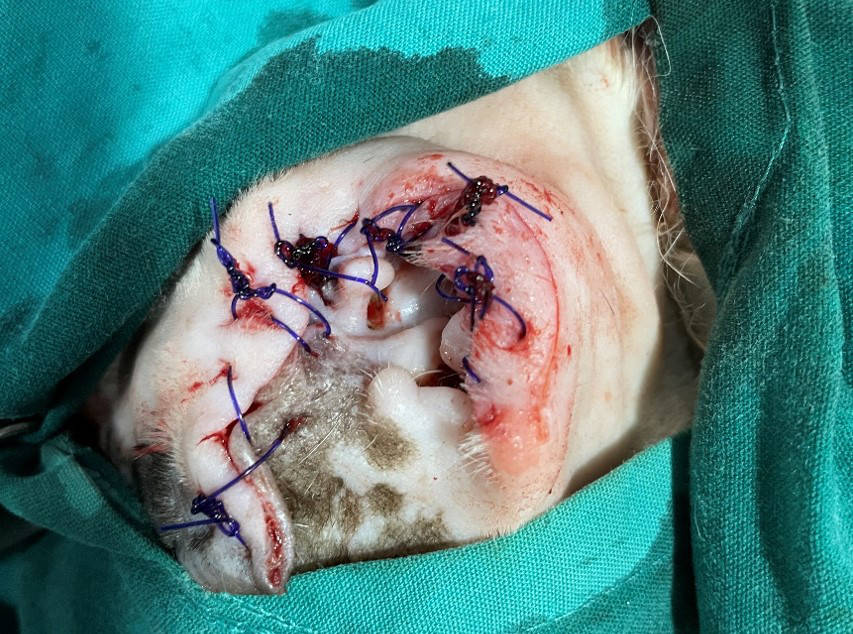 Figure 7 - Apposition of the wound edges with skin sutures.

Post-operative pain medication (meloxicam, SID for three days) and a course of antibiotics (amoxicillin BID for seven days), were prescribed.

When metastatic disease is not detected, the prognosis is good and the pinnal excision should be curative. Wound breakdown is something to consider and precautionary measures should be taken to prevent self-inflected trauma of the wound (buster collar and separation from other animals who could groom the wound during healing).

The cat was brought back to the clinic, ten days post-surgery to remove the sutures. The surgical wound had healed in a routine manner and the cat made a full recovery.

SSC is a malignant tumour of the epidermal cells in the skin that have differentiated to keratinocytes. It is the third common skin tumour observed in cats after mast cell and basal cell tumours. They can occur anywhere in the skin; however, they are more likely to form in areas of the body where hair is sparse, as well as in patients living in hot countries where UV radiation is high. Predilection sites include the pinnae, eyelids and the planum nasale2-4. SCC is more common in cats older than 12 years but is observed in the age group 5 to 17 years. Bilateral lesions are more common than unilateral2. Lesions can vary in appearance and can include reddened or thickened areas, which may be ulcerated or crusted. They can elicit a pain reaction upon palpation. The tumours are often slow growing and have a low metastatic potential for local lymph nodes and the lung. Patients may also present with the precancerous form (actinic keratosis) which hasn't yet transformed into a neoplastic state.

Another manifestation of SCC is 'Bowen's carcinoma in-situ (multicentric SCC). Unlike SCC, this is not thought to arise from an increased exposure to UV radiation. It presents as multicentric, non-healing lesions which are often raised, irregular and variably pigmented. These tumours are also slow growing, do not metastasise (hence the name 'in situ' meaning contained) and are often curative with surgical excision or other therapies.

SCC can also appear on other sites of the body including the mouth, tongue, tonsils, oesophagus, or lungs.

A thorough work up is essential during the diagnostic phase; an FNA and/or an incisional biopsy will confirm the diagnosis Although metastasis is unlikely, it should be considered. A fine needle aspiration of lymph nodes plus radiography of the lungs will help to stage the tumour.

Once a diagnosis is made and a treatment plan is being determined, CBC, biochemistry and urinalysis should be undertaken to inform the clinician of the ability for the patient to manage the treatment options.

Complete surgical removal is the treatment of choice for SCC in cats. It is best to attempt this in the earliest stage of the disease as possible to maximise a good prognosis through complete excision of the tumour. Advanced imaging, where available, can aid with surgical margin planning, but unfortunately complete surgical excision with good margins is not always possible where SCC is in a difficult position e.g. oral cavity. In these cases, treatment can be complemented with photodynamic therapy, radiation therapy or chemotherapy5.

The prognosis depends on the stage of the tumour, its location and whether it has been completed excised or not. For the case of a pinnectomy, the prognosis is generally good with no recurrence. However, further lesions may develop due to continued exposure to UV radiation. 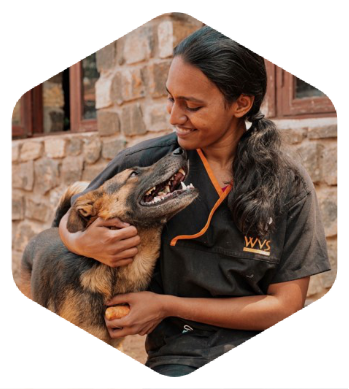 Hello, I am Meera (she/her). I have been a part of WVS family for just over six months. My passion for life is wildlife and my goal is to conserve it. As a vet I take my job of saving lives very seriously, it also includes showering them with cuddles. I thoroughly enjoy medicine and wish to learn as much as I can. Apart from my job I enjoy reading about outer space and sexual and reproductive and health rights (SRHR) activism.