Reviewing the use of topical ivermectin for effective treatment of myiasis

Ivermectin is a common endectoparasiticide which is mostly used orally and subcutaneously for the treatment of various parasitic diseases. Topical use of the diluted injectable drug has been shown to be effective at killing fly larvae (maggots) in the treatment of myiasis. Using corrosive substances, oils and strong disinfectants in wounds can delay the wound healing process and increase the risk of complications.

Myiasis is a common condition in tropical countries and is defined as the infestation of tissues by fly larvae, commonly referred to as maggots. Flies generally lay their eggs in open wounds or close to inflamed skin which can occur due to dampness and urine scolding. Depending on local conditions the eggs hatch within 8 to 24 hours and the small larvae burrow into the damaged skin, tunnelling through the subcutaneous tissue causing deep lesions which are prone to secondary bacterial infection. If left untreated these chronic wounds become progressively larger, causing significant compromise in the welfare of the animal eventually leading to the development of septicaemia and death.

The conventional treatment consists of the manual removal of the larvae from tissue and appropriate wound management thorough wound cleaning, surgical debridement of devitalised tissue and the use of a suitable dressings. Not only is the removal of live larvae from the wounds practically challenging whilst trying to minimise trauma to viable tissue, but also painful for the animal. This process is greatly helped through the use of topical parasiticide such as ivermectin. Ivermectin, when used topically, binds selectively to glutamate chloride ion channels, increasing cell permeability to chloride ions and causing hyperpolarization of the nerve or muscle cell and the death of the parasite.

The use of topical cream preparations are not recommended in wounds as they have the potential to restrict drainage from the wound and delay healing. Instead and so application of diluted injectable solution for the purpose of aiding maggot clearance prior to wound lavage and surgical management.

The recommended dose for subcutaneous administration is 0.2 – 0.4 mg/kg while the topically administered ivermectin can be given at 0.5mg/kg. The AUC (Area Under the Curve), a measure of how much drug reaches the bloodstream in a given period of time after a dose is given, is lower after topical administration than subcutaneous administration, and so doses of 0.5 mg/kg are safe for use topically in adult dogs that are not of a breed that is predisposed to ivermectin sensitivity (e.g. collies) [1].

The LD50 for dogs is 80 mg/kg, however certain breeds like collies and other herding breeds are more sensitive to ivermectin and can only tolerate doses only up to 0.1 mg/kg [1,2]. Puppies and kittens younger than 6 weeks are also more susceptible to ivermectin toxicity.

The clinical signs of ivermectin poisoning include dehydration, bradycardia, cyanosis due to respiratory depression, mydriasis, vomiting, ataxia, tremors, hypersalivation, blindness, coma and death. There is no antidote for ivermectin toxicity and treatment consists of supportive and symptomatic measures including fluid therapy, keeping the animal warm and maintaining appropriate heart rate and respiration.

A topical compound formulation containing ivermectin 1% in propylene glycol (10mg/ml) was used to treat traumatic myiasis wherein after one hour the majority of larvae had died and the remaining ones showed slow and erratic movements. Twenty four hours later, no larvae remained alive [3].

Efficacy of an ivermectin pour-on at 0.5 mg/kg used on the back midline of cattle was studied in two similar studies were use of topical ivermectin proved beneficial against naturally [4,5]. Ivermectin can also be used in the treatment of scabies and demodicidosis [6].

Dose. Ivermectin (5mg/10kg) is taken in a syringe and diluted according to the size of the maggot wound. For example if the concentration of the injectable is 1% (10mg/ml), for a 10 kg dog 0.5ml can be dilute and instilled in the maggot wound. 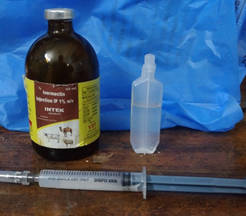 Ivermectin instillation. The solution is then instilled in the wound and left for 12 hours. 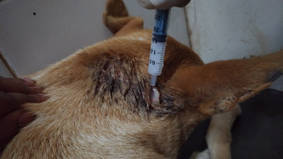 Maggot removal. The animal is sedated and the dead maggots are removed. 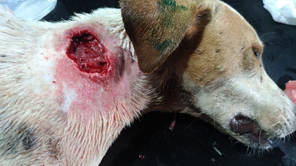 Debridement. The wound is surgically debrided and all devitalised tissue is removed.

Lavage. The wound thoroughly flushed with Normal saline under pressure. 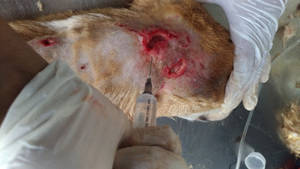 Dressing. A suitable dressing like a wet to dry Bandage is applied. 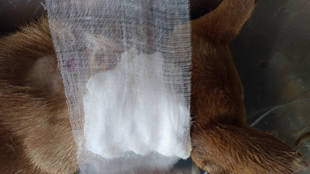 Repeat. The wound is flushed daily and the bandage is changed according to the amount of discharge in the wound. 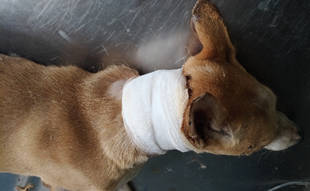 Delayed primary closure. Once the wound is clean the wound can be closed surgically or left to granulate and heal by secondary intention. 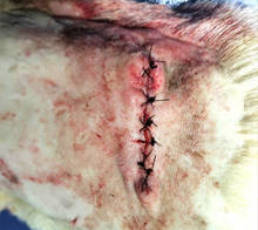 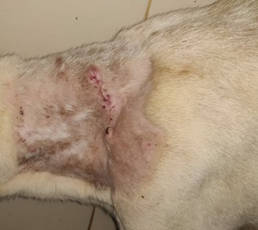 The widespread availability of injectable ivermectin and its topical use having no significant effects on wound healing, makes it a useful treatment in the early stages of managing animals with myiasis. Though systemic treatment using ivermectin via subcutaneous injection can also have an effect on the viability of maggots in wounds, it is not recommended for juvenile, debilitated or geriatric animals. Hence this makes use of topical ivermectin a safer treatment option to support the early removal of maggots in myiasis cases to support more rapid wound healing. Topical ivermectin should still be used with care in very young patients and those of breeds predisposed to sensitivity (e.g. collies).

Dr Anahita is a WVS Taskforce Vet based in Goa, India, where she oversees the delivery of our international training courses. She has worked in high-throughput spay neuter programmes across India and internationally, and has also supported the delivery of mass dog vaccination campaigns to control rabies in Goa state.