This is the story of Heng Heng, a very friendly owned dog who was wandering in his neighbourhood one morning and came back to his owners with a huge cut on his back and a smaller one on his paw. His owners were unsure how this had happened to poor Heng Heng, his name meaning 'Good Fortune', but it seems like he got himself into quite a bit or trouble with a sharp object. Read about his recovery here.

Heng Heng was a 3-year-old castrated male dog. His owner reported that he came home one morning with a large cut across his back. The owner applied Gentian Violet, a common livestock antiseptic, to the wound, and brought him to the WVS Thailand Rescue and Rehabilitation Centre for treatment (Figure 1). Heng Heng didn't have any history of vaccination, deworming or ectoparasite control. 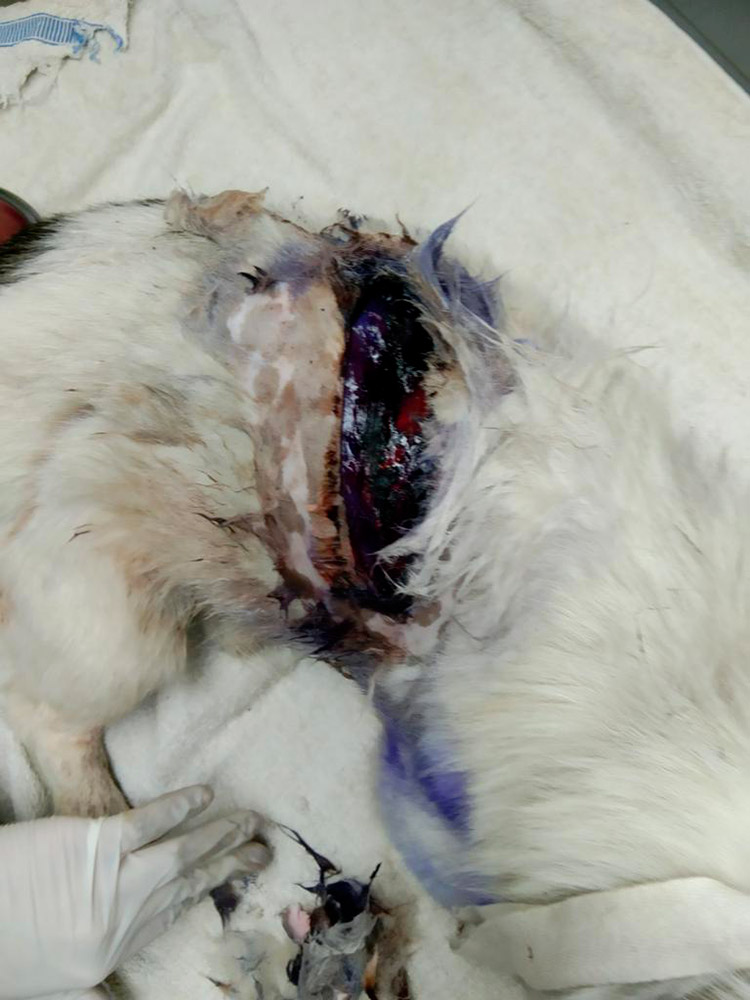 Figure 1 — Heng Heng's wound on day 0. See how the skin and surrounding hair is stained with Gentian Violet. 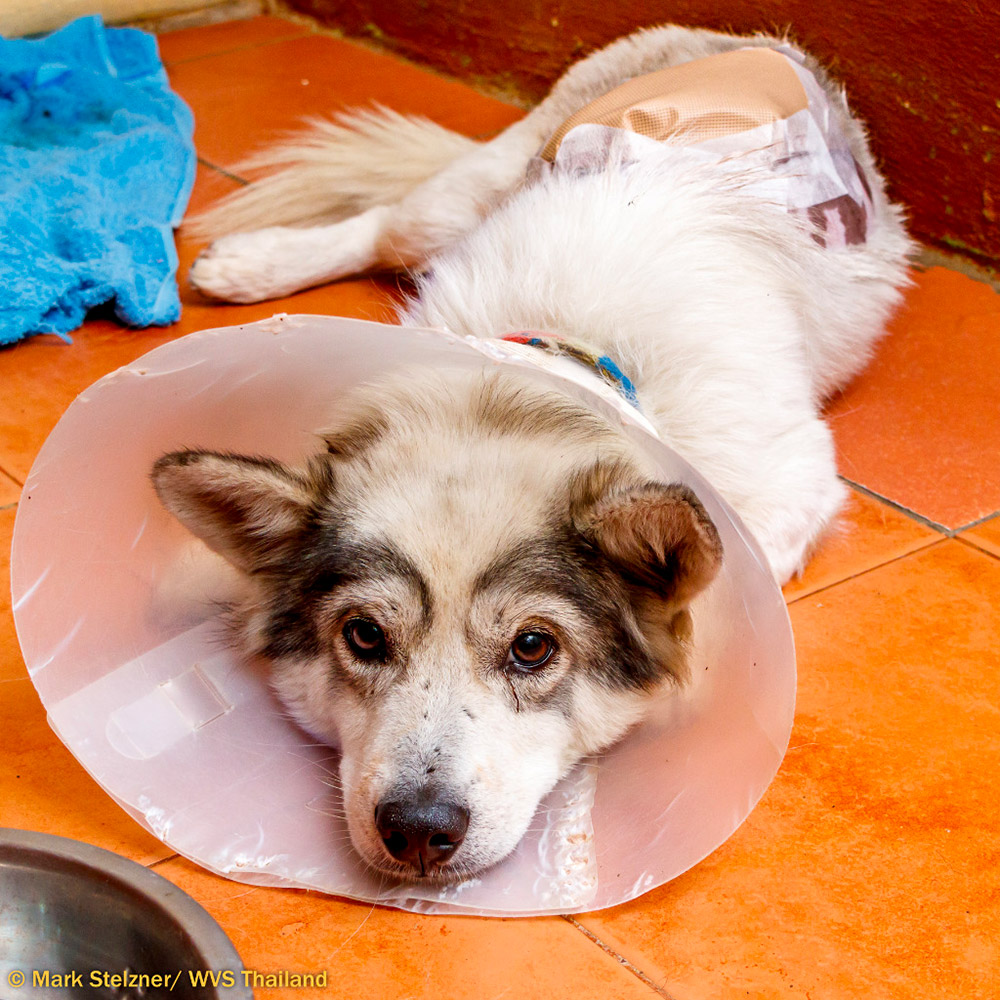 Heng Heng's clinical exam revealed no abnormalities apart from the large laceration across the right side of his body. He had a quiet, gentle nature and was not overly distressed.

The wound area could be seen clearly after Heng Heng was sedated and the vet team shaved the hair away from around the wound. The suspected time since the injury was within the "golden period" for primary closure, which would have been the vet's first treatment choice. However, due to the contamination from the Gentian Violet spray across the whole wound, it was difficult to determine the extent and damage to the tissue.

Complete blood count and biochemistry were performed to determine the patient's general health status. Leukocytosis and mild anaemia were found in the blood results.

The stage of the wound was not able to be established by the vet team due to the Gentian Violet spray that covered it. So, a thorough wound cleansing was initiated with chlorhexidine scrub and saline irrigation. The vet team planned for delayed primary closure once they could confirm that there was no necrosis or infection. The wound was cleansed daily with dilute chlorhexidine and saline flushing.

Heng Heng was put on:

After 10 days, the wound showed no signs of infection, had formed a nice granulation bed and was ready for surgical closure (Figure 2). 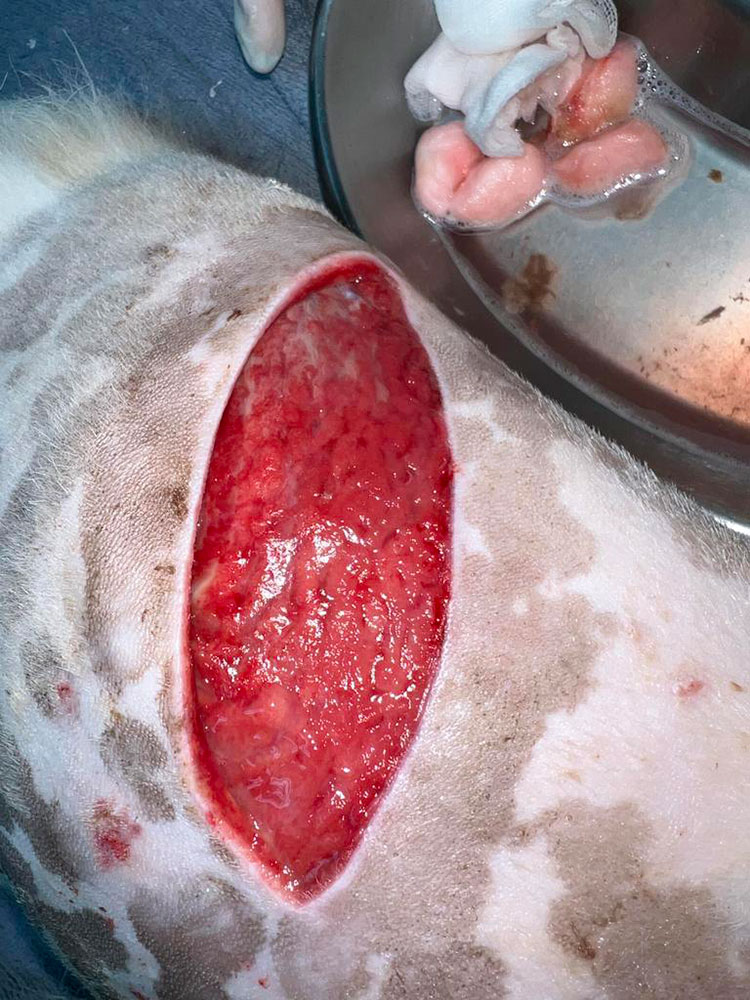 In order to close the wound surgically, the edges were debrided to create fresh wound edges which would appose easily. The skin was then undermined using blunt dissection to allow the edges to be brought together and to reduce the tension on the sutures. After this, a blade was used to remove the very top layer of granulation tissue cell.

After the wound was closed, the vets applied a compression bandage to reduce the possibility of oedema and dispensed carprofen at 4.4 mg/kg, once daily, orally, for 5 days. The wound did not have any complications after the surgery and Heng Heng was able to go home 1 week after surgery (Figure 3). 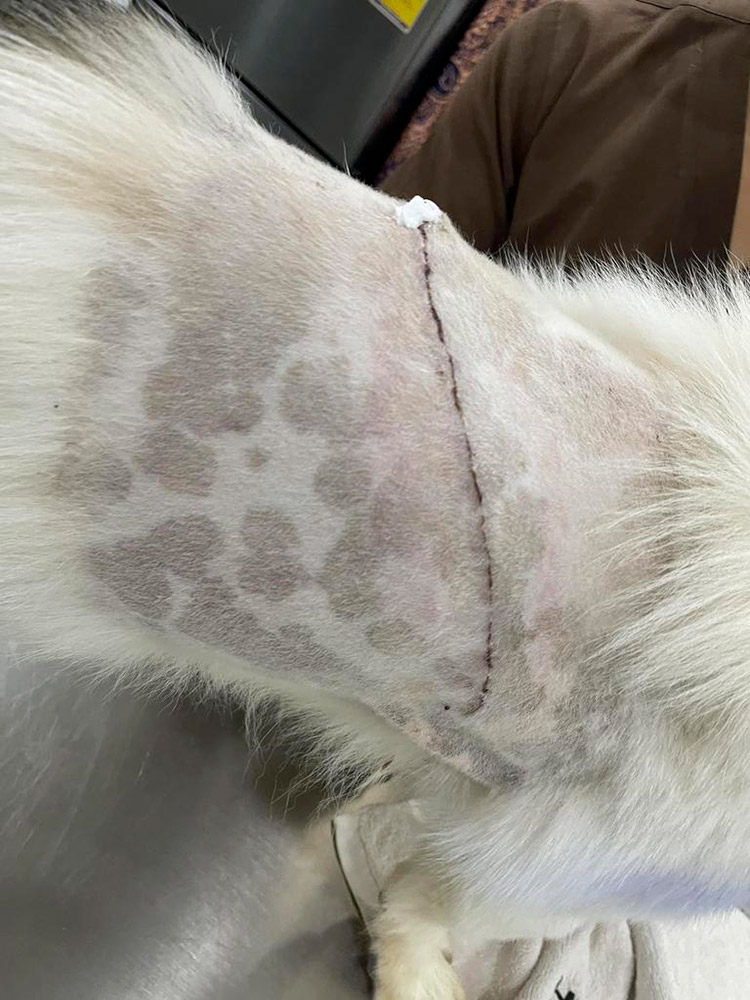 Figure 3 — The wound 5 days after surgery

The prognosis for this wound closure was good to fair. The level of infection was controlled, but there would always a risk of infection with a large wound such as this one. The biggest risk was wound dehiscence due to tension on the sutures. While the undermining of the tissues and placement of walking sutures will help with this, if Heng Heng starts exercising too soon or if the tissues swell badly, then this would increase the risk.

Ideally, after an injury has occurred, it should be covered with a clean, dry bandage to prevent further contamination. Unfortunately, in this case, Gentian Violet was used by the owner in an attempt to cleanse the wound. This made it difficult to evaluate the wound properly and meant that the vet team missed the "golden period" for primary wound closure. The golden period is the first 6-8 hours between the injury and bacterial multiplication to an extent that the wound would be considered infected (10^5 CFU per gram of tissue). If a wound is in the golden period and it is not grossly contaminated, then it is considered suitable to be surgically closed. In this case, even though Gentian Violet can inhibit the growth of bacteria to some extent, it is not the ideal medium to use for wound cleansing during the period when the wound could still be potentially closed.

Due to the contamination, the vet team decided secondary closure was the most suitable method of closure for this wound. Secondary closure is surgical closure of a wound once a granulation bed has formed. Granulation tissue works to reduce infection and reduces the space under a skin closure which can be an incubation chamber for bacteria (dead space). Secondary closure is used, like in this case, when a wound is contaminated or traumatised and is also too large for closure by second intention. Second intention wound closure relies on keeping the wound clean and healthy and allowing it to contract naturally through epithelialisation. This is only suitable for smaller wounds in places where a reduction in mobility or increase in tension will be less important in that location. In Heng Heng's case, the wound was much too large to be left to heal by second intention, so secondary closure was chosen.

If secondary closure had not been possible, but the wound wasn't suitable for secondary intention healing either, then a flap or graft could have been used to reduce the defect. Due to the location of this wound, partially on the flank which has an adequate amount of mobile skin, a flap could have been used in this case.

When a large wound is closed, there is the potential for dead space. A dead space is the gap between tissues which have been separated that would normally be opposed. Dead spaces can complicate wound healing and be a location of fluid accumulation and possibly infection. The steps that the surgeons took in this case to use walking sutures to reduce the deficit would have been useful in preventing a large dead space. In addition to this, the use of a compression bandage will have helped reduce the size of the dead space temporarily, preventing fluid accumulation. This bandage was changed daily until the vet team were happy that the wound's edges had opposed well.

In some circumstances the placement of a Penrose drain (a passive drain) would have been suitable. These are useful if excess oedema is expected to be produced, but they are a potential source of infection from the outside back into the wound. Therefore, it is important to increase the frequency of bandage changes.

This case is a common example of a wound which will be seen in clinics, it shows how these wounds can be managed well even in low-resource settings.