Here we describe a case of vaginal prolapse in a small-breed dog that was treated at the WVS International Training Centre in Thailand. This condition is seen uncommonly in bitches; it occurs during proestrus/oestrus as a result of an excessive response to the influence of circulating oestrogen by the vaginal mucosa. In the case of Leah, she presented with a large "mass" protruding from her vulva. Here is her story. 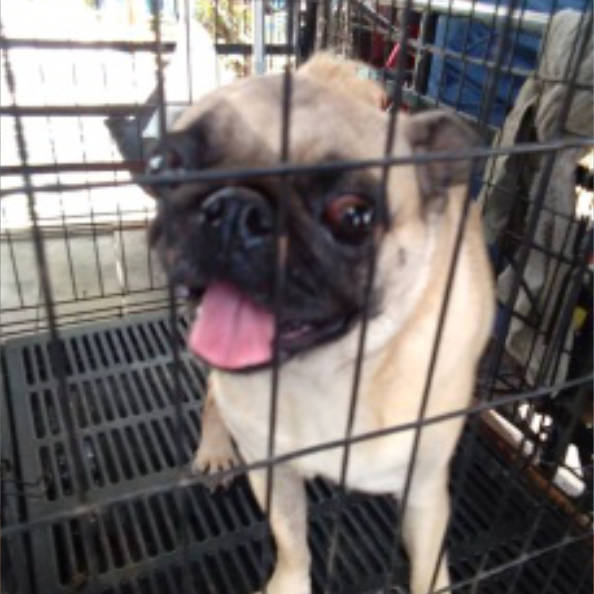 Leah, a female pug, was found at a local temple near Chiang Mai, Thailand (suspected to have been disowned). A local lady, who regularly feeds the temple dogs, noticed that something was "hanging out" of her vulva, and so she brought her to our 'WVS Thailand Rescue Centre' for treatment.

Female entire pug, with an estimated age of 5 years, in good body condition (3/5 BCS) and weighing 7.8 kg. There was a large, reddened, "doughnut-shaped" mass protruding from her vulva which measured approximately 6 cm in diameter, and had a central lumen. The protruding tissue was hyperaemic, moist and markedly oedematous, with areas of trauma and tissue necrosis. There was no haemorrhage or other discharge. The dog was otherwise normal with no signs of stranguria/dysuria.

The primary abnormality in this case was the displaced tissue emerging from the vulva.

From the initial presentation, the following differential list was compiled:

Upon further examination of the conscious animal by gentle palpation of the tissue and vagina, it was revealed that the tissue originated from the entire vaginal wall (circumferential), and was therefore consistent with a type III vaginal prolapse.

What is the grading system for vaginal hyperplasia/prolapse?

The presentation for vaginal hyperplasia/prolapse is a protrusion of vaginal mucosa through the vulva. Visual inspection and palpation enables this condition to be classified into 3 types, based on the nature and severity of the tissue protrusion:

Type I: Small amount of protruding mucosa that originates from the vaginal floor and cranial to the urethral opening. The mucosa is often non-traumatised, appearing smooth, pink and glistening.

Type II: More prominent protrusion of pear-shaped/tongue-shaped tissue, originating from the ventral and lateral walls of the vagina, and which is often reducible.

Type III: The prolapsed tissue involves the entire circumference of the vagina, which gives it a 'doughnut-shaped' appearance. The urethral orifice can often be exteriorised. It is often not possible to reduce back into the vagina.

Initial conservative management. An attempt was made to manipulate the prolapse back into the vagina. Firstly, the dog was sedated with tiletamine hydrochloride/zolazepam hydrochloride (Zoletil) and xylazine. The protruding tissue was then lavaged using normal saline, and a lubricant was used to try to reduce it back inside the vagina; however, this was unsuccessful due to the level of oedema and swelling present.

Swabs soaked in a concentrated (hyperosmotic) sugar solution, were then applied to the tissue surface to encourage shrinkage by drawing water out by osmosis. After 10-15 minutes, the vagina size had decreased slightly, and a further attempt to reduce it was made. A second attempt was tried after a further 15 minutes of sugar treatment. However, the mass was still too large to be reduced.

As type III prolapses are unlikely to resolve spontaneously, even after oestrogen levels have lowered, it was decided to proceed to surgical treatment.

Once Leah had recovered from sedation, an Elizabethan collar was applied to prevent further self-trauma. As the mucosa was traumatised with areas of necrotic tissue and likely bacterial infection, a course of amoxicillin-clavulanic acid antibiotic (10mg/kg, PO (orally) twice daily (BID)), was started. In addition, the NSAID drug Carprofen (4mg/kg SC once a day on day 1, the reducing to 2mg/kg once a day PO (oral)) was given to reduce inflammation and provide pain relief.

Surgical treatment. Surgical treatment involves routine ovariohysterectomy (OHE) and manual reduction of the prolapsed tissues, sometimes requiring an episiotomy. Leah was anaesthetised. With the aid of further sugar treatment to shrink the tissue, it was successfully replaced within the vagina with the help of gentle traction on the reproductive tract from the abdomen. A routine OHE was then performed. To encourage the vaginal tissue to remain in place until the effects of oestrogen had disappeared, the vulva was partially closed with a purse-string suture - a simple continuous suture pattern using 2-0 non-absorbable nylon suture material, using an intravenous fluid line as padding material to prevent skin injury (Figure 2).

Figure 2 - Appearance of the vulva after the surgery on day 1 (left) and day 14 (right). Swelling was significantly reduced.

Antibiotic and analgesic treatment was continued for a total of seven days post-surgery.

A few days after surgery, the vaginal lumen was visible and could be accessed and cleaned daily. A small amount of purulent discharge was noted which was cleaned and resolved. After 14 days, the sutures were removed. Re-occurrence of the prolapse was not observed with 3 months follow-up post-surgery. 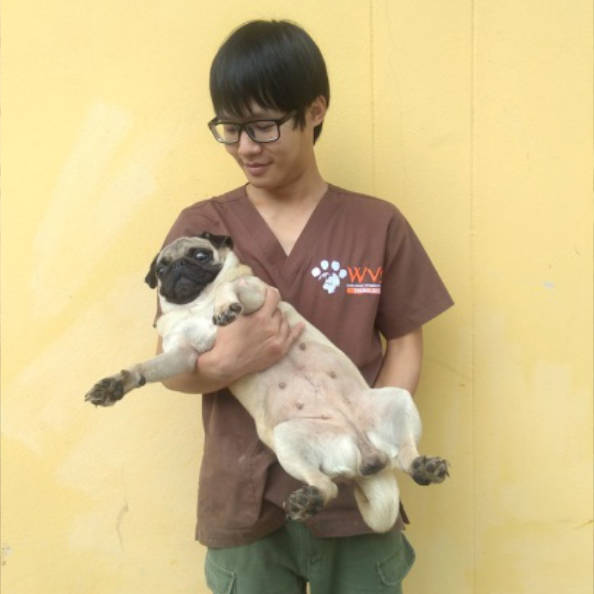 Vaginal prolapse is an uncommon condition in the bitch. The aetiology is linked to increased oestrogen hormone stimulation on the vaginal mucosa during proestrus, oestrus and near parturition, and so vaginal prolapse almost always occurs in entire female dogs. Oestrogen stimulation normally causes vaginal mucosa to become oedematous, keratinsed and hyperaemic. Other causes include genetic predisposition, dystocia, chronic constipation (excessive straining) and interruption of the mating process. For Leah, we suspected that she was kept on a breeding farm, which likely put a considerable stress on her reproductive system. In addition, brachycephalic breeds have high incidence of this condition due to hereditary weakness of the peri-vulvar tissue.

A diagnosis of vaginal prolapse can be made on the basis of the history and physical examination findings. If the prolapsed tissue is suspected to be neoplastic, which is more likely in older bitches, or without evidence of being in proestrus or oestrus, vaginal cytology or fine needle aspiration should be performed to investigate this further.

There are three stage classification schemes for vaginal prolapse in dog which is dependent on the extent of protrusion of the mass (see above for details). Treatment options are dependent on the class. For types I and II, some cases resolve spontaneously after oestrous has finished, or if they receive hormonal therapy (GnRH or hCG) to shortened oestrus. In these cases, steps should be taken to keep the mucosa healthy and prevent trauma, such cleaning and moisturising the exposed mucosa, and the use of an Elizabethan dog collar, until the condition has resolved. Insertion of a urethral catheter may be required to prevent or treat urethral obstruction.

In Leah's case, her vaginal mass was severely enlarged and oedematous. Normally, for a type III prolapse, surgery is the treatment of choice. OHE is performed to prevent removal hormonal influence and prevent recurrence. Gentle traction on the uterus, combined with manual prolapse compression through the vulva, enabled reduction back into its correct position without the need for an episiotomy procedure. Placement of the temporary vulval sutures maintained the tissue in situ within the vagina until it returned to its normal size. The prognosis for Leah was good-excellent and the condition should not recur in the future. 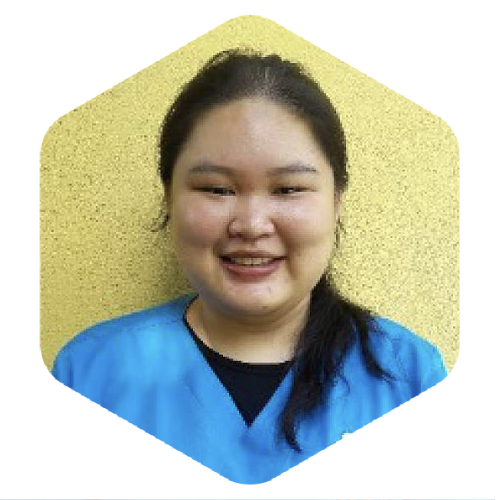 Dr Panchita Chaiongkarn (aka "Pim") is a core staff member of the veterinary team at WVS Thailand. A graduate from Chiang Mai University she started working with WVS and quickly developing solid surgical skills and experience with rescue cases. She is regularly mentoring and lecturing students during our 'Animal Birth Control' Surgical course and managing rescue cases from initial assessment to release.